Ethan gave me this card a few days ago: 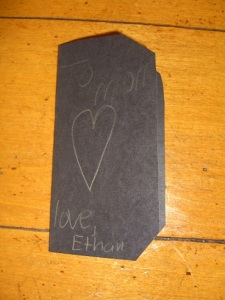 Looks sweet, doesn’t it? But no! Look at the inside: 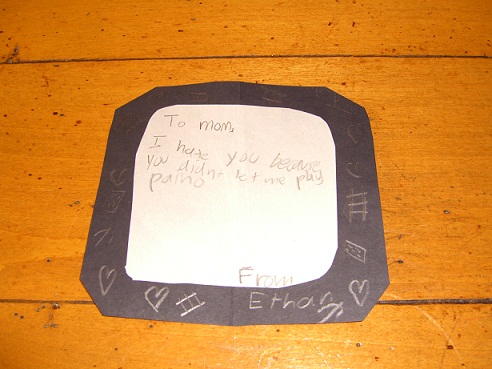 “To mom, I hate you because you didn’t let me play piano.”

If you’re wondering why mean old mom wouldn’t let him play the piano, it’s a reference to Ethan’s always contentious piano practice sessions. I have to sit with him while he practices. If I don’t, he plays only the pieces he knows best, not the ones he’s stuggling with, and he plays the easy bits only, eliding over the hard parts. If he plays the hard parts at all, he will play them too fast and butcher them, missing every other note, without stopping to correct the problems. In short, if he practices alone for a day or two, his piano playing doesn’t get better; it gets worse.

So I sit with him. I make sure he plays every piece, that he plays them at an appropriate tempo, and that he stops to correct mistakes. I also watch his wrist position, which otherwise deteriorates over time.

Ethan hates this. He wants to practice alone so he can be sloppy and not get called on it. So he fights me during practice. I’ll ask him to do the F major scale, and he’ll play the D major. I’ll put the music of one piece up on the piano, and he’ll play another. I’ll remind him that a certain measure should be forte, and he will play it piano. If he becomes so defiant that we can’t get anything done, I terminate the practice session and send him to his room.

You might think he would be relieved at this–I mean, clearly he hates the practice sessions–but being sent away from the piano infuriates him. This is my best tool at managing his defiance. But when I use it, he gets really mad, and that note he wrote me is the consequence.

When I saw it, I had to restrain myself to keep from laughing. I’m not offended by a note like that from Ethan for three reasons.

Reason #1: I know that, in truth, Ethan loves and respects me. He demands endless hugs and kisses and back rubs, says he loves me, picks flowers for me, and out of the blue says things like, “Mom, you’re beautiful.” The fact that he can’t dominate me seems to actually drive him closer, except for these occasional outbursts of rage.

Reason #2: Even if he did hate me, it wouldn’t matter, because being loved by my kids isn’t my goal in parenting them. My goal is to help them grow into successful, productive adults who give back more to society than they take from it. My goal with piano is not to turn Ethan into a great piano player (I doubt that’s in the cards), but for him to learn the meta-lessons involved. These include learning to persevere when something is hard and how to practice (or study) effectively. I also want him to grow comfortable with interacting with powerful, intimidating people, like his piano teacher, a concert pianist who teaches some of the most talented kids in the area.

The irony is that by fighting with Ethan, who clearly has a strong desire to be dominant/alpha, I’m actually serving his interests. You don’t get to be an “alpha” in this world by force of personality–you need to be good at something. Sloppy, lazy work won’t cut it. He has the raw talent. He just needs to learn to make the most of it.

Reason #3: I’m not in parenting for acknowledgements or kudos. Certainly I appreciate them when I get them, but I view parenting as a “pay it forward” undertaking. I’m raising my kids as well as I can not because I expect them to reward me for it later, but because my parents did it for me and now it’s my turn. My kids can “thank” me later by raising their own kids as well as they are able.

At any rate, Ethan must have felt bad about the note, because later he gave me another one:

“Dear mom, I love you mommy because you love me. Happy Mother’s Day. Love, Ethan.”

Happy Mother’s Day to all my fellow parents in the trenches!

9 Responses to Happy Mother’s Day from my little ingrate