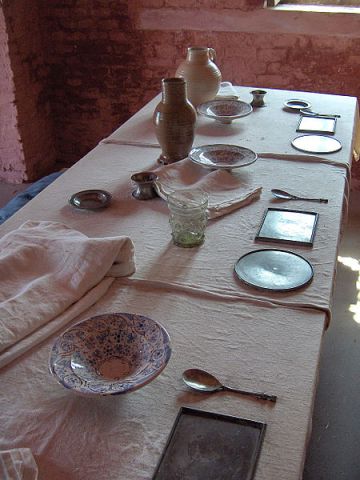 If you’re writing a historical or fantasy novel and come to a scene where the characters are eating a meal, you may need to think about what they eat with. One utensil you can, with confidence, provide to your characters is the spoon. Spoons exist in every human culture. They appear to be the only universal utensil.

As for the fork, it’s been around since ancient times as a tool for prodding and lifting meat during cooking, but the use of the fork at the table is relatively recent. In the 1600’s, using a fork at the table was considered unmanly and exposed one to ridicule. By the 1700’s, this had completely reversed and forks were used commonly throughout Europe and America. This may have coincided with the increasing tendency of people to eat off of flat plates rather than out of bowls and trenchers. A fork isn’t terribly effective when eating out of a bowl.

Of course, there are many cultures that have no use for a fork, for example the Chinese, who have used chopsticks since ancient times (they became established during the Han dynasty, 206 BC – 220 AD). Chopsticks go along with an entirely different means of preparing food. In Europe and America, a fork and knife are used to cut meat on one’s own plate at the table. But in China, all the knife work takes place in the kitchen. There is no need for a knife at the table (or a fork). Incidentally, the reason most restaurants use disposable chopsticks is because there has been an historical taboo against sharing chopsticks.

And there are some cultures where people eat with fingers. These cultures tend to have elaborate before-meal washing procedures to ensure cleanliness, and usually only certain fingers are used: the thumb, forefinger, and middle finger of the right hand.

So there are a lot of options, and if you’re writing a fantasy based in medieval Europe, your characters don’t use forks.

2 Responses to History for the fantasy buff: Eating utensils